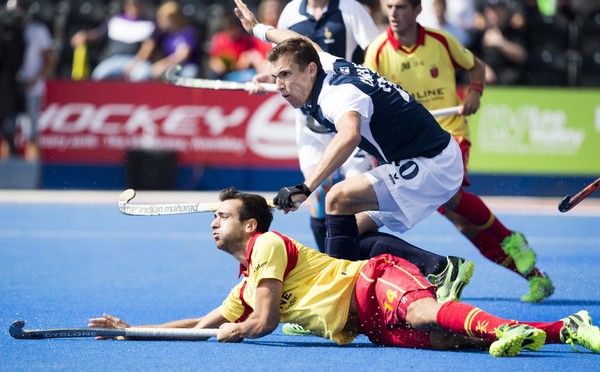 Spain scraped through in a thrilling finale, winning 4-3 in a hugely important encounter to maintain their place in the top tier. Defeat for the French condemned them into EuroHockey Championship II, whilst Spain was rewarded with another campaign in the top flight in 2017, writes Jonathan Spencer.

Spain’s Alejandro de Frutos Gomez said, “We were good at the start but suffered a lot late on but the most important thing is we survived the drop.

“We are scoring plenty of goals but importantly from now on, we must work on our defence as we are conceding too many goals.”

The favourites Spain, although injury stricken, enjoyed the early possession and nearly went ahead in the 6th minute through fine play on the right hand side to carve open the French defence. However, a fantastic diving save by Edgar Reynaud denied Gonzales de Castejon a tap in opening goal.

The Spanish (11th in the world) demonstrated why they are ranked six places (17th) ahead of the French in the rankings, creating more goal scoring opportunities throughout the first quarter.

Most notably, Salvador Piera was found unmarked at the top of the French semi-circle but drove his fierce shot into the right hand side netting. However, the score remained 0-0 going into the second quarter with both teams yet to reach their potential.

A goal was desperately needed to liven up this tense affair and this duly came in the 21st minute. Spain, who had previously only scored against Russia in this tournament, made it 1-0 through a lovely reverse shot into the bottom right hand corner from Gabriel Dabanch.

Xavi Lleonart (‘28’) capitalised on a poor aerial by Viktor Lockwood and found the bottom right hand corner with reverse stick shot to build the Spanish momentum and make it 2-0.

They thoroughly deserved to go into half time with a two-goal lead. However, France would have to perform much better in the last 30 minutes if they were to avoid relegation. The Spanish defence held firm throughout the third quarter and were more than content with the current score line. This was demonstrated by Spain deciding to defend with every man behind the ball, leaving the French a mountain to climb in the final quarter.

But France finally found the impetus in a mad-cap final quarter and pulled one goal back early in the fourth. Martin Genestet (‘49’) was in the right place at the right time to poke the ball back into an empty net.

All of a sudden, the Spanish looked nervous and the score line was somehow level. France were awarded a penalty corner and Viktor Charlet (‘51’), the hero in their last match, saw his drag flick find the bottom right corner.

From being an uneventful match in the first half, the game came was now wild and open. Spain bounced back and found themselves 3-2 ahead. Lleonart (‘52’) doubled his tally through a sliding slap hit into the bottom right corner.

The action was non-stop and it was impossible to predict who would get the victory. Only four minutes was left on the clock before Piera scored the winning goal to ensure survival for his side.

For French captain, Tom Genestet it was a heart-breaking end to the competition: “I’m disappointed. We wanted to finish fifth or sixth, and we didn’t achieve that. We were close to taking points against Belgium and Ireland, and today we fought back to 2-2 and 3-3 before falling behind.

“To lose 4-3 against Spain, Ireland and Belgium is difficult. But there are some positives – French hockey is improving.”