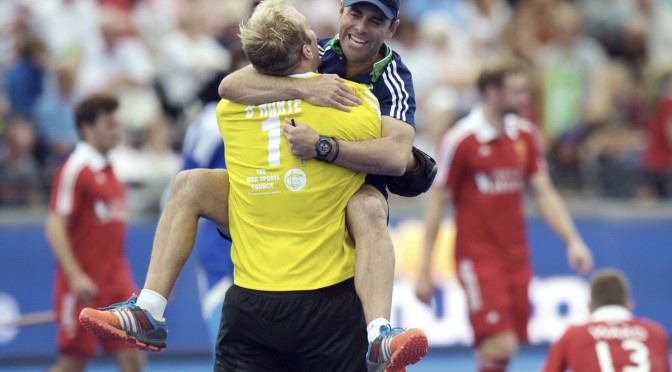 History was made as the Irish team won the bronze medal at the Unibet EuroHockey Championships after a battling last quarter which saw all 11 men camped in their own half protecting a 3-2 lead against England. A breakaway run in the final 30 seconds saw the Green Machine put the game to bed and win their first major international medal. The final action saw Shane O’Donoghue slot home a penalty stroke past stand-in ‘keeper Mark Gleghorne, after the Ireland team had broken free from the England press around their circle.

The bronze medal match between Ireland and England was a typically competitive affair between two teams who know each other well, and whose rivalry extends through club, European and world-wide competitions. Ireland – ranked 14th in the world – came into the match never having beaten England in a top-ranking tournament.

And yet, despite the weight of history and the nine world ranking points separating the teams, this was as closely fought and intriguing as any match played in this Unibet EuroHockey Championship.

England started the brighter, the red shirts pouring forwards down both flanks but unable to breach the Irish last line of defence. Nick Catlin was the first to test the goal, his hard shot saved by David Harte. Alastair Brogdon was next to make inroads into the Irish circle, but he ran into the flat stick of Kirk Shmmins, while Chris Griffiths found himself literally run off the back line by the hardworking and disciplined Irish defence – the game plan clearly to keep England out of the shooting zone.

Moving into the last minutes of the quarter, a high Irish press nearly paid off: Dan Shingles lost the ball on the edge of the circle. However this was dealt with by the ever-dependable Middleton. His interception led to a England counter-attack. Harry Martin self passed and waltzed past the Irish centre defence before slipping to Ashley Jackson who deftly touched it to Griffiths. Harry Martin (11′) had continued his run and was the recipient of Griffiths neat through ball. The England midfielder had no hesitation in slipping the ball over the prone form of Harte.

However, Ireland did not make the semi-finals by capitulating under pressure and the Green Machine were quickly back into the game forcing a penalty corner. Shane O’Donoghue (13′) made no mistake and his drag flick left Pinner with no chance of making a save.

The second quarter saw England cooking up a storm as they poured forth relentlessly in attempt to wear down the staunch Irish defence. A penalty corner was awarded to England following good play by Jackson on the edge of the circle. The subsequent flick by Sam Ward was just high over Davey Harte’s goal.

An off-the-ball incident at top of the circle saw Peter Caruth awarded a yellow card for impeding Nick Catlin, but Ireland had a lucky escape as the ensuing penalty corner shot by Jackson hit the post and the ball pinged side-ways behind the giant frame of Harte to safety.

The pressure paid off, despite some fantastic defensive work by the Irish, the England team took the lead when Adam Dixon (23′) was able to deflect Jackson’s penalty corner drag flick into the top of the net.

Six minutes later and momentum shifted the way of the Irish. An innovative penalty corner routine saw Alan Sothern benefit from some great skills at the top of the circle from Eugene Magee. The midfielder spun and slipped the ball out of the path of the defensive runners. Sothern dinked the ball over the defenders sticks and then wrong-footed Pinner in the goal to bring the scores level.

Going into half-time Craig Fulton would have been the happier coach. His side had amassed just three shots on goal, with a return of two, while England had managed nine shots with the same payback. This was the tone of the match – England taking a greater share of possession but, in the areas that matter – the two goal mouths – it was Ireland who were the better executioners.

Fulton’s pleasure at his team’s performance would have been even greater a few minutes later when Ireland stormed into the lead. Eugene Magee (39′) put a drag-flick corner decisively past Pinner. His initial passage into the England circle to win the corner was far too easy, with the England defence sloppy with their stick skills and discipline.

The final quarter was a do or die 15 minutes for all the players on the pitch. Ireland after their first ever medal in this competition, England trying to lose the title of ‘nearly men’. A defensive moment of sheer brilliance from player of the match Paul Gleghorne saw Middleton’s progress towards goal abruptly halted and the green clad Irish supporters breathed again. The default position for the Irish team became a tight 11-man wall as the whole team worked to get their bodies once more behind the ball.

England thought they had the equaliser when Ashley Jackson put the ball in the net from a penalty corner. His corner shot was judged illegal after it struck John Jackson on the thigh as he ran down the shot.

With three minutes to play Pinner left the field so that England could pour forward. With a minute left on the clock, England won a penalty corner, only to see it saved. The Irish team continued to defend their circle, but broke free with 30 seconds on the clock. The scrambling England defence fouled and O’Donoghue put the penalty  stroke away and sealed the match.

Speaking after the game John Jackson said: “We have achieved something it will be very hard to replicate – a medal at the European Championships. England are a quality side, so we knew we had to stop them attacking down the central channels. Everyone worked so hard.”

England’s Dan Shingles praised Ireland for their tenacity adding that he felt that England had enjoyed greater possession but had been unable to turn that to goals. “Where it mattered, the defence and the attacking circles, we let ourselves down. Overall, we have played well this tournament, but there is fine-tuning to be done.”