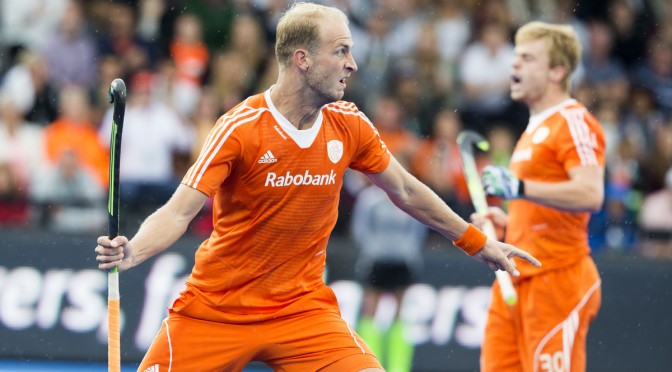 The Netherlands produced a truly sensational first half display to win the Unibet EuroHockey Championships final, claiming their first title since 2007 – the last time the competition was played in England.

It was their fourth continental championship and also the biggest ever victory in the final match as they tore through the German defences in an uncharacteristically one-sided contest.

Each goal before the break was a thing of beauty as Billy Bakker’s sixth minute opener set the tone before a pair of Mink van der Weerden corner strikes were augmented by pitch-length counter-attack moves completed by Jeroen Hertzberger and Rogier Hofman. Possibly the best was left until last when Mirco Pruijser ran the length of the pitch and crashed his shot past Jacobi.

The two teams have met in the finals of the European Hockey Championships on six previous occasions with the German team recording six victories. But this finals weekend at the Unibet EuroHockey Championships at Lee Valley is a time for history to be made, and the Netherlands did not just break that record, they totally smashed it in a 6-1 win that began in the sixth minute and never really relented.

The opening encounters suggested that Nicolas Jacobi was going to be a nemesis for the Netherlands as he made some unbelievably athletic saves in the opening minutes of the match, but such was the attacking mindset of this Netherlands team that it was clear that the fortress set up by Jacobi would inevitably be breached. It was just a question of when, and how many times.

The first goal, when it came, was via a penalty corner. Oskar Deeke committed a clumsy foul on Mink van der Weerden. The initial penalty was chased down by Martin Haner, and in the ensuing sequence of play, the umpire held the whistle in a brilliant piece of officiating, allowing Billy Bakker (6′) to fire home past Jacobi with a reverse stick rifling shot.

Germany nearly hit straight back when some great stick work by Mats Grambusch set up the chance for Marco Miltkau, the striker took the ball too wide and was forced to shoot into the side netting.

Van der Weerden (14′) added the second Dutch goal from a penalty corner, after a sustained period of attacking play from the men in orange. They were helped by some uncharacteristic errors by the German players, but all the credit goes to the drag flick specialist who placed the ball low past Jacobi.

The second quarter saw Germany come back at the Netherlands. The ball fell to Christopher Wesley, but Jaap Stockmann held his ground and Wesley was forced to hit the ball too hard and too high in an effort to get round the ‘keeper.

The attacking quality of the Netherlands was no better exemplified than through their third goal. Jeroen Hertzberger (21′) took the ball around Haner and then shot into Jacobi’s far corner.

Seve van Ass joined the act, with a blistering run through the centre of the German defence. The stage was set for van der Weerden (22′) and the drag flick specialist made no mistake as he put his second and the Netherland’s fourth into the net.

Rogier Hofman (29′) made it five with a breath-taking counter-attack. A six second sequence of action saw Deecke shoot against Stockmann. The Dutch ‘keeper cleared wide and the resulting ball out of defence fell to Hofman who sprinted for the opposite goal and slammed the ball home.

Following a half time team talk that was probably one of the tougher discussions of Markus Weise’s coaching career, the teams took to the field for a 30 minutes session that would really see if the German reputation for turning matches around was warranted.

It seemed as if the Netherlands hadn’t read the same script, because rather than slowing down their attack and counter-attack, the Netherlands continued to force the pace. Player of the Match Robbert Kemperman was controlling the midfield and his players responded to his lead. Valentin Verga put in a 50 metre jinking run that cut through the German defence. Wesley took the ball to the other end of the pitch, but again the Dutch defence did its job and Verga was again released to create a chance for Hertzberger to add to his tally.

As the quarter wore down it just didn’t seem to be destined to go Germany’s way. Scuffed shots, mis-timed tackles and misplaced passes are all phrases rarely associated with the German team, but this was a far from classic German performance.

Two penalty corners from van der Weerden were well chased down by Haner, and Germany tried to build an attack from that point. As the game moved towards its conclusion, Christopher Ruhr (50′) found his way through the German defence and scored a goal that was as high class as any in the match.

The game drew to a close with both teams looking dead on their feet through exhaustion. A six match winning streak came to an end and the Netherlands can justifiably call themselves the champions of Europe.