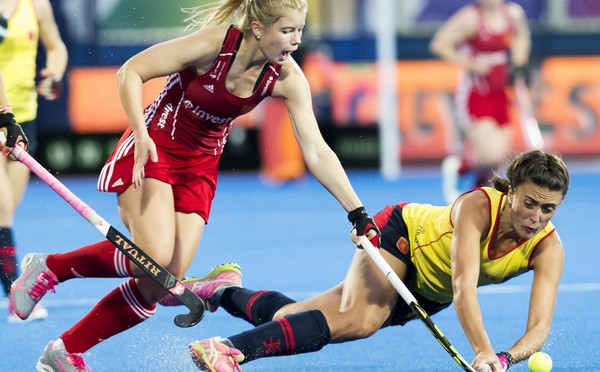 England and the Netherlands all set for final showdown

England will meet the Netherlands in the final of the women’s Unibet EuroHockey Championships as they got the best of Spain and Germany by just a single goal each in Friday’s semi-finals.

For England, it means they are back-to-back finals and will hope to go one better than two years ago in Boom when they were denied in a shoot-out. The Netherlands, meanwhile, are going for a ninth title when they meet at 4pm on Sunday while Spain at the Germany battle for bronze at 1.30pm.

The Netherlands were the first side to progress to the final with Ginella Zerbo’s single goal enough to see off a resilient Germany for whom Yvonne Frank was superb throughout.

Indeed, it was toughest challenge to date for the Dutch as the reigning champions were not likely to give up their title without a fight. As it was, a moment of real quality settled the tie 1-0 as Ellen Hoog found a wonderful angle to pass through the defences of a couple of defenders.

Zerbo took the ball on and cleverly finished from close range for the game’s only goal. The Dutch created plenty more openings – Maartje Paumen rattling the bar with the best of them – but it was the only goal to arrive, enough to put the Netherlands through to the final for a ninth time.

On reaching the UniBet EuroHockey Championship final, defender Margot van Geefen said: “It was a tough game. Semi-finals are always exciting and close. But we won and are in the final again. Now it’s time to look ahead to winning the tournament.”

England got off to flying start with Alex Danson continuing her superb form, netting her fourth goal of the tournament in the fourth minute with sharp reactions to a corner rebound.

Spain, though, were resilient and organised, making life difficult for the hosts in front of a boisterous home crowd. Georgina Oliva was the engine behind the Spanish resistence and she fittingly scored a wonderous goal to equalise, making it 1-1 going into the final quarter.

But England kept working and got their reward with eight minutes to go when Georgie Twigg pushed goalward and Owsley poked home amid a thicket of legs for the winning goal.

While Owsley was named player of the match and took the plaudits for the winning goal, she was quick to pay tribute to the work done further back to set the base for the victory.

“Us forwards, we are happy to do the work for the team because our defenders are absolutely outstanding. They’ve saved us a lot tonight and were incredible. They get the ball to us and we sometimes get the glory and we are so proud of this team performance.”

In Pool C, meanwhile, Poland came agonisingly close to their first ever win in the top tier of European hockey when they were just seconds away from a 1-0 victory over Italy. Head coach Fernando Ferrara removed keeper Martine Chirico and the Italians pushed forwards. The ploy paid off and so Poland and Italy both go into their final games on Sunday knowing only a win will suffice.

Belgium were 1-0 winners over Scotland to ensure their place in the top tier of the competition as Louise Versavel’s early goal made the difference. It lifts them to six points in Pool C ahead while Scotland are on three points and need a draw against Poland or better to stay in the competition for 2017, too.